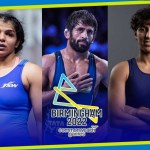 Star Indian wrestler Bajrang Punia clinched Gold Medal for India after winning the final against Canada’s Lachlan Mcneil in men’s 65 kg at the ongoing Commonwealth Games 2022 at Birmingham on Friday. Punia was extremely dominant in the first period and did not let his opponent score. He finished with a 4-0 lead over McNeil at the end of the first period. But McNeil made a comeback with a strong effort and he cut down the deficit by two points to make it 2-4. Punia took the lead once again after scoring two more points. The Indian did not look back from there and won the match 9-2.

Indian wrestler Sakshi Malik clinched another gold medal in wrestling of the day by defeating Ana Paula Godinez Gonzalez in the finals of women’s freestyle 62 kg category. The Canadian Gonzalez was dominating the match initially as she gained a 0-4 lead in the first period. Then in the second period, Malik scripted an entire comeback to equal the scores 4-4 and won the match via fall. The match lasted for 3 minutes and 47 seconds.

Indian grappler Deepak Punia won the gold medal in the Men’s Freestyle 86kg category as he defeated Pakistan’s Muhammad Inam on Friday. Punia bagged India’s third wrestling gold at the Commonwealth Games 2022. The Indian grappler took 2-0 lead in the first period and all the pressure was on the Punia’s opponent heading into the last three minutes. In the final three minutes, he managed to hold his own and he kept his opponent at bay to walk away with the gold. The Pakistani wrestler struggled to find a way through Punia’s strong defence and went home without scoring a point.

Anshu Malik bagged the silver medal as she faced a 3-7 loss to Nigeria’s Adekuoroye in the gold medal game. Anshu Malik fought hard but was too defensive at the start of the fight and changed his tactics at the last minute to rebound which allowed Odunayo Folasade Adekuoroye to counterattack. Her Nigerian opponent was dominant throughout and won the match by pinning and rolling Malik out of the ring.

India’s Mohit Grewal defeated Johnson 5-0 in the bronze medal match. Grewal bagged the medal in only three minutes and 30 seconds. The Indian grappler proved to be too good for his Jamaican opponent as he managed to hold his own and kept his opponent at bay walking away with a bronze medal.

India finished in the top spot at Wrestling in the 2018 Commonwealth Games after bagging a total of 12 medals that includes 5 gold medals, 3 silver and 4 bronze medals. Bajrang Punia, Vinesh Phogat, Sakshi Malik and Divya Kakran have all won the medals in the 2018 Games and they are all part of the Indian contingent this year as well.

All the Wrestling events will be conducted on 5th and 6th August.

Ravi Dahiya is a sure shot contender for a medal. The 24-year old, who has been in terrific form since the Tokyo Olympics, where he clinched the silver medal will be making his maiden appearance at the Commonwealth Games and will look to add amedal from this tournament in his kitty. He would be playing in the 57 kg category. Dahiya missed the World Championships this year to participate in the Commonwealth Games trials. At the trials, he sailed past his opponents easily to book a spot in the uadrennial event.

Vinesh Phogat, who was expected to be one of the strong contenders for a medal at the Tokyo Olympics suffered a shock exit from the quadrennial event withou a medal and since then Phogat has not been at her best. Vinesh also faced some issues off the game as she was temporarily suspended by the Wrestling Federation after the Tokyo Games. Vinesh will now look to use the quadrennial event to get back to her best form. She won the gold last time in 50 kg catefgory and now she will b eplaying in the 53 kg category.

How to watch CWG 2022 Live Streaming in India?

The live streaming CWG 2022 will be available on Sony Sports Network and SonyLiv app.