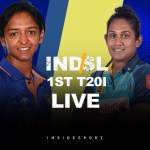 IND-W vs SL-W LIVE SCORE – India-W vs SriLanka-W 1st T20 LIVE: The Indian women’s cricket team will be eyeing a fresh start under new all-format skipper Harmanpreet Kaur. India plays Sri Lanka on Thursday in the first T20 International of the three-match series. The match starts at 2.30 and will be LIVE streamed on Sri Lanka Cricket Youtube Channel: Follow IND-W vs SL-W LIVE Updates with InsideSport.IN

IND-W vs SL-W T20 Series: Another instance of STEPMOTHERLY treatment for Women…

India-W vs SriLanka-W 1st T20 LIVE: India under new skipper will look to start their campaign on high. From Lanka T20s, Indian girls are all set to feature in the upcoming Commonwealth Games in Birmingham.

This will be the first international assignment for the Indian women since the disappointment at the 2022 Women’s World Cup.

Notably, the Indian team, for the first time, will be without the legendary Mithali Raj. Mithali hung up her boots earlier this month after an illustrious 23-year-old career.

Harmanpreet Chase Milestone: On the personal front, skipper Harmanpreet will be eyeing a milestone.

The 33-year-old batter, who has amassed 2319 runs from 121 matches, needs another 46 runs to eclipse Mithali in the shortest format.

The spotlight will also be on vice-captain Smriti Mandhana, Harmanpreet and coach Ramesh Powar. The trio recorded a seven match winning streak in the last T20 World Cup before India were knocked out in the semifinals by South Africa.

Can SriLanka challenge India? Hosts Sri Lanka, on the other hand, will start the series on the back foot as they were recently whitewashed 0-3 by Pakistan in a T20 series.

The Indians though will have to remain vigilant against the likes of Sri Lankan veterans Oshadi Ranasinghe and Chamari Athapaththu.

The Indians last played a one-off game against New Zealand in the shortest format in February this year, which they lost by 18 runs.

Going by current form and world rankings, India will definitely start as favourites. The hosts will need to raise their game by leaps and bounds to upset the Indians.

The three-game T20 series will be followed by as many ODIs, scheduled to be played at Pallekele on July 1, 4 and 7.