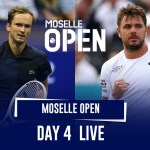 Moselle Open LIVE: Daniil Medvedev is all set to make his return ever since losing his World No.1 ranking after the US Open, as he begins his Moselle Open campaign on Thursday. The Russian, who is currently ranked World No.4 will take on Stan Wawrinka in the second round. The match is scheduled to begin at 9.30 pm IST  Follow Moselle Open LIVE updates on InsideSport.IN

Also Read: Laver Cup 2022 LIVE: Roger Federer greets teammates Novak Djokovic and Andy Murray during Laver Cup practice session, says ‘Ready to be with you on your side” – Watch Video

@stanwawrinka defeats Sousa 7-6 6-2 and sets up a meeting with Daniil Medvedev in Round 2@MoselleOpen pic.twitter.com/RjjQBemmeW

Medvedev vs Wawrinka Head-to-head: Both the players have faced each other three time in the past with Medvedev leading the head-to-head record 2-1. They last met at the Australian Open in 2020 with Wawrinka winning the Round of 16 contest after winning in five sets. Medvedev enters the match as the favourite. However Wawrinka has shown good form in the first round and will look to challenge the World No.4.

Where to watch Moselle Open 2022 LIVE?

The matches at the Moselle Open can be watched LIVE on Tennis Channel.